Our attention has been brought to the current infamous situation in Ibadan Polytechnic arising from the outrageous hike in the school fees following recent increments in the school and acceptance fees and last session.

The information reaching us from the members of our student network in Ibadan through a signed broadcast by the current student union under the leadership of Comr. Akadiri Bayonle Seun, has it that the current controversial increment was as much as 50% and all effort to reach a bearable compromise for the students have proved abortive.

To this effect, the student union instructed all its members to suspend all payment until the issue was resolved then they embarked on a peaceful protect to express their grievances as provided for in the Nigerian constitution. To our shock, a report that reached us from a reliable source alleged that the President was slapped by the Chief Security Officer (CSO).

We believe it's very insensitive for the school management of Ibadan Polytechnic to increase the school charges by 50% considering the current economic challenges in the country. However we have at once set our teams on this case and HELP Foundation is very much interested in it. We are making consultations for legal actions if the school fails to do the needful- reverse the increment and prosecute the CSO for violating the rights and dignity of student unionism in Nigeria.

Join our hashtag campaign on social media- #helpibadanpolystudents -and together we will yet again preserve the rights of a Nigerian student to a safe and affordable education.

Popular posts from this blog 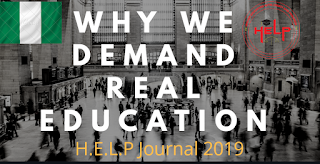 As a final year student in the school we popularly would call 'better by far' compared to other universities in Nigeria due to its annual record as the highest sought after University in Nigeria,  though this is not to say UNILORIN is actually the best school in the Country but it suffices to say it is in the very class of the best available tertiary education in Nigeria.

This gives me a rare opportunity to examine what Nigerian higher education in its best have to offer and with news and interviews with friends in other universities, i can boast of a comprehensive view of higher education in Nigeria on completion on this investigative series.
Being the first episode, it's pertinent to express my very intent in the writing of this articles and then the expected content. 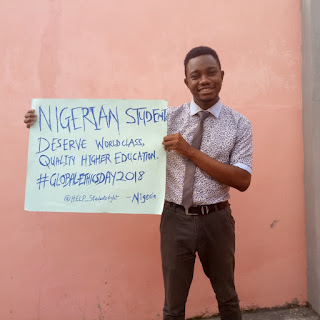 H.E.L.P STUDENTS NETWORK With GLOBAL ETHICS COUNCIL PresentsGlobal Ethics Day 2018-NigeriaTheme: Promoting Ethics on Campus; Safe Space For Students.We campaign for:- Due Process on campus-The eradication of the culture of student abuse-The eradication of cultism and other forms of campus violence -OthersWhat ethics matter most in your space?How to participate-Follow HELP foundation - help_studentsng-Write your Ethical message(s) on a cardboard-Snap them with you and friends-Upload the pictures on social media with#GlobalEthicsDay2018#ethicsIn_nigeriaCampus@help_studentsng
Read more
- November 22, 2018 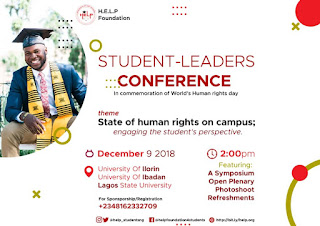 H.E.L.P Foundation wishes to announce to the general public its first Student-Leaders Conference holding in Lagos State University, University of Ibadan and University of Ilorin simultaneously on Dec. 9th, 2018 in commemoration of 2018 world's human rights day.

Invitation only open to first 100 leaders.


We urge the progressive students of the LASU, UI and UNILORIN to take advantage of this conference as it promises to be instrumental in giving their experiences and opinions on the state of student affairs a needed voice. Participation is by Invitation.

All invited participants will be opened a Leadership Profile with HELP Foundation for future recommendations.

H.E.L.P FOUNDATION
H.E.L.P FOUNDATION was formed in the year 2017 in response to the degree of Injustice, dehumanization and Insecurity Nigerian youths face both in process of gaining admission and their Learning experience on Campus. We seek to eradicate the culture of student abuse,cultism and poor learning environment. We advocate for the preservation of civil rights of students in their campuses and expose all cases of threat to this rights especially due process, freedom of speech, time management and sanctity of conscience. HELP also works to develop students in areas of leadership and self actualization while providing support to helpless students.